Hello happy readers!  I hope you all had a good weekend.  I worked and thus I'm off today facing the daunting task of having to mow which is a very long and tiring process for numerous reasons.  But before I even think about going out there, I wanted to share with you my thoughts on a stand-alone spin-off novel of a series I read a couple years back and LOVED.  The novel in question, Obsession by Jennifer L. Armentrout.  It is an adult novel in the same Lux universe but you don't have to read the series to enjoy this it can stand on its own, though it does have a link to the series.  I have been thrilled to know a new book/series is coming out in this world and this was perfect to get me back in the zone/world as it has been a bit.  So thoughts ahead but remember this is an adult book. 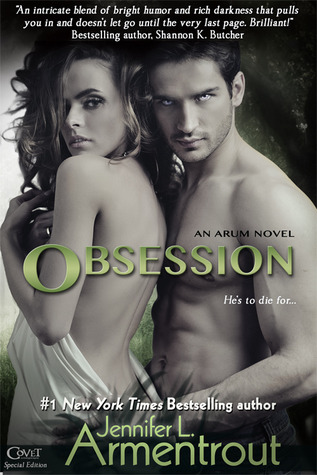 Hunter is an Arum.  He isn't what you would call a good guy or hero.  He works for the DoD I that they leave him be and he gets to kill bad Luxen for them.  Not the worst job.  Until they saddle him with babysitting a human who has Luxen trying to kill her.  Serena thought her best friend was having a mental breakdown talking about aliens but now she's stuck with a man who is most definitely not human and other not human things trying to kill her, so maybe she's the one having the breakdown.  Mutual attraction is instant for the duo but tempers flare as they are forced into a life and death situation.  She stirs something new inside of him, breaking his rules, and he may be an alien but he is to die for.  Can he keep her safe and at what cost?

I was a bit sketchy on some of the finer points in the Luxen world when I dove in and was a bit nervous but that was not at all important.  It tells you everything you need to know in the story.  It was different getting to know things from an Arum side though which was cool.  But as a whole the story is easy to follow in the universe and if anything just made me want to re-read the Lux series lol.

“But when friendships begin with cupcakes, chocolate at that, no truer bond develops.”

That said this books had me confused on how to rate it for a while.  Hunter is not the guy you root for the happily ever after.  He is not just a "bad boy" but he has moments of being so much worse.  In the end I ended up enjoying the story and characters as a whole understanding the way things came about and such.  Being in both of their heads for the alternating POV's was key I think.  I loved the story in the end I was so excited but there were moments in the story that held me in pause and made me rethink Hunter towards the start.  He has some serious moments doing things that are NOT okay in any way of thinking and normally I'd condemn a character for that but in this, knowing what both were thinking at the time it kind of smoothed it over.  Still part of my brain is thinking that is not cool dude like ever.  So I went back and forth and is ultimately why I didn't rate it a 5 stars because right after finishing it I LOVED it and I still really enjoyed it but there was some things that were played as sexy, and hindsight for them could be, but are not okay.  Still given my slight concerns there, again the dual POV really saved this for me because it's kind of hard to call someone out for doing something when the other character is really into it, I had to factor that in.

Other than that which I feel had to be addressed, I still really ended up loving this book.  The chemistry between Serena and Hunter was there.  A bit of insta-lust which I think most people can relate to.  I also loved that she questioned her sanity on numerous occasion from aliens to her desire for one given her precarious situation.  It grounded it.  I wanted more for each of them as the story progressed.  Seeing from an Arums perspective on the Luxen both current and their history I really can see the war between them in a new light.  The way Serena is slowly let into the world and what he tells her not just about the whole alien thing but about him was sweet.  Then you of course have some seriously sexy times.  Again this is an adult story so there is lots of swearing and sexy times.  I enjoyed them for sure but more I liked the progression and how each builds and expands not only the sexy time itself but the connection between them.

The story and action were so much fun and despite some flaws in the beginning with Hunter and consent I love his "I will kick you a$$" attitude because more than anything he has what it takes to back it up.  I even like his cocky sexy attitude because yeah he kind of is.  Serena has been through a lot and she managed to roll with everything pretty well, probably in a constant state of shock given everything, and she has a good head on her shoulders.  She is also strong in that she will go after what she believes or wants and even if it isn't the safe option or the option.  I like that she isn't afraid to disagree or argue with Hunter even at the start when she is afraid of him.  There is plenty of sexy times, action, suspense and some good laughs in there as well!  It was dark and dangerous.  Overall I enjoyed the book and kind of wish it wasn't a stand alone because there is more story that can be told to be sure.