Hello happy readers!  I hope you had a great weekend, I did.  Not very productive on the reading front but I blame Netflix and finding out that Daredevil Season 2 dropped so of course I had to marathon all 13 episodes.  That said I did take a break in there to go see the newest Divergent movie in theaters, Allegiant.  Now I wasn't 100% sure about the news of them splitting the last book into two unsure if there was enough to make it work but seeing it here we go. 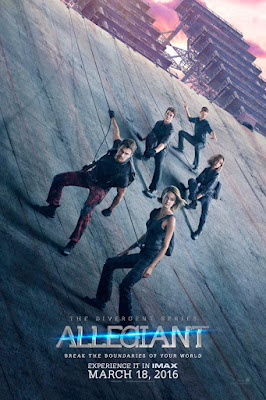 Okay I should start by saying that Insurgent wasn't the best for me.  I felt they changed a bit too much and it got a bit weird but overall I was in the book to movie frenzy and was just happy to have it.  That said I didn't re-read Allegiant prior to the movie, figuring with all the changes and just how high tech the world of the movies are would only give me things to nitpick about.  So I haven't read Allegiant since the start of 2014 so the details on the book are a little fuzzy.  So by that I'm doing my review based more on the enjoyment of the movie as a movie rather than a book adaptation.  So that said I did have fun.

First thing to note is the acting was on point.  Tris and Four have some great chemistry going on which is important to the story as a whole and making you feel for them as we've seen their relationship develop as whole.  There was also a connection between the rest of the cast that shows the connections they've been though already, like the tension between Caleb and Tris or Peter and everyone.  Peter though, while I never liked him as a character overall I love him in the movies because he has some of the best lines.  OMG the timing and perfect execution of them were beyond what I could expect and had me rolling.  It was much needed to break up much of the seriousness of the other scenes.  Still while the characters I loved where there it felt like a couple, Christina for sure, were only there when it was necessary and while I feel everything we've learned about them up to that point would have made them more vocal than they were.  I feel like she would have been more vocal about the fringe for sure.
The story builds on what we had in the previous movies and we get to know more about the world as a whole, what happened outside the walls of Chicago.  We learn their whole life has been an experiment controlled by people they never knew existed.  Everything they have been through could have been.  They now know there are people outside but the new people in control don't want anyone to go outside and is doing anything to stop it. One tyrant has taken over for another it seems.  Still Tris knows she has to go outside, she has to see what is out there and who can blame her.  Still what they find and what they learn changes everything they thought they knew accept who the one thing that stays true, who they are.

There is plenty of action and such keeping it moving along and it didn't seem long at all.  It felt like it was over pretty quickly so no dragging moments which I appreciated.  While the sci-fi futuristic tech that keep with the previous movies remains and becomes even more in your face, which as a fan of the books I was not a fan of, some aspects were kind of neat.  The shower and the bubble??? Not so much more like a WTF moment for me.  And really the elevator?  That is just excessive and no wonder it took so long took to do anything lol.  Also I had to suspend my disbelief on a few things towards the end, just as it wasn't fully explained in the context, but in the end I could roll with it.  That and a few continuity issues had me feeling a bit less for it but as I went in with kind of low expectations I think they were exceeded.

That said it was a fun time for me and I'm excited to see where the story will go in the final installment.  I am curious about how some aspects of the book will play out and if changes will be made.  As there were some changes made already, it leaves a bit of hope for those who have read the book.  If you've read you know what I'm talking about.  If not…you should read.  I'd love to hear your thoughts and opinions on the movie in the comments below.