Hello happy readers!  It's another fun Friday, I'm posting later than usual because, frankly I got home this morning and went straight to bed and slept like the dead lol.  Still Well rested I still wanted to share a review with you.  My original review is posted over at No BSBook Reviews here where I'm a new guest reviewer (how exciting right!) so check out the site slam packed with tons of reviews and goodies.  Anywho here are my thoughts and feels on TheGlittering Court by Richelle Mead. 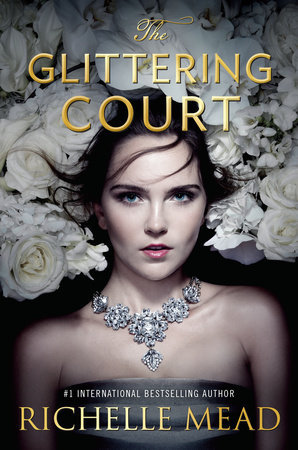 I have been highly anticipating this book since I heard about it.  Richelle Mead is an auto-buy author for me.  So when I got this I was doing my happy dance and let me tell you I was not disappointed.  I just LOVED this book.  It’s completely different from anything I have read and it built so many different layers into the story I was enthralled.

Adelaide is a strong character for me, not so much physically as some of her other lead heroines in the past, because of her strength of will.  She is willing to give up her title and position for one of less means, still marrying a ‘good match’ rather than for love but only wishes a choice in the matter.  She takes a huge leap in leaving everything behind and facing the dangers.  Then she keeps going despite trouble and trials that arise as the story progresses.  She cares deeply for others and only wants to help those she cares about not thinking of her own needs until after.  The way she cares and sticks up for Mira and how she helps Tamsin perfect her studies down to risking even more for Cedric is what spoke to me.

Speaking of Cedric…that man is charming.

I had a moment while reading this at work where a man called about an issue and somehow I had it in my mind that their name was Cedric.  Man:  (explains what he needs) Me: Okay sir, I’ll send someone over.  You name was…Cedric correct?  Man: (pause) It’s Matthew.  Me: (smacks head with palm) Of course I’m sorry."  Yep, that happened.  Clearly this man was in my head.   He’s a good man and an interesting character I adored getting to know more about.

The story was pretty full.  It has something for everyone, romance, adventure, action, intrigue, social hierarchy and more.  You follow from the start as Adelaide takes the position at the Glittering Court, through her year of schooling where she learns much more than she expected and though the journey to Adoria and all that transpires there from the balls and parties to the rough and tumble way of the world.  There was never a dull moment for me, always something happening either in the plot or just learning more about the characters.  Everything seemed well thought out and as I finished I could see how little things here and there had been planted throughout to make it all flow beautifully.

The Glittering Court is only the first book in a new series but at the end I felt completely satisfied; it reads like it could be a standalone.  This is by design.  As the other two books in the series are described, by Mead herself, as not continuous stories but each being the same story told from different POVs and their own story throughout.  This means they can be read individually or out of order each one filling in aspects that were left open.  There are some things left unanswered and so much left in the world undiscovered I am excitedly awaiting it's release so I can start the countdown for the sequel in the series.  I highly recommend this book to anyone who enjoys a good story and think Mead fans will be thrilled about the new series.