The Mirror King (The Orphan Queen #2)

Hello Happy Readers!  So I read The Orphan Queen (review) back before I hit my reading freeze or whatever with everything happening and I really enjoyed it.  I was also thrilled, and only somewhat nervous, that it was part of a dualology and that I had the next book ready to go.  So one book left to figure out oh so so much.  So today I’m discussing the sequel and final book, The Mirror King by Jodi Meadows.  Spoilers for the first book as this picks up where the other left us hanging. 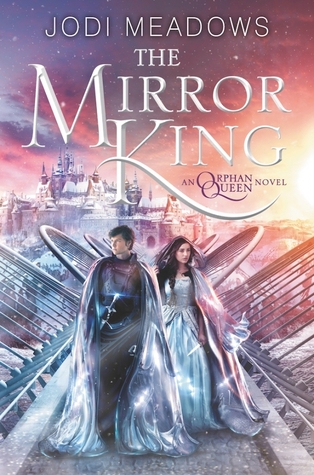 When I saw we pick up where we left off, I mean it.  Prince was breaking our hearts announcing his wedding date to his fiancé and not our Wil and then being shot.  We don’t know if he’ll make it and all sorts of madness ensues. I was caught in this because I wanted something to stop the impending wedding but I didn’t want him hurt.  Saving him is of utmost importance and then, despite it all he still must hold true to his plans for the wedding which breaks our hearts in a different way.  What’s harder still is that his bride to be, Meredith,  isn't horrible.

The Mirror King had a lot to answer to finish up the journey we started in book one.  More than the clear romantic pairing that is separated by so much that is.  Though I admit to having that high on my list.  What can I saw I'm a romantic.  We also had this Wrath boy to contend with on top of the whole battle against the wraith and battle of kingdoms.  Both Wil and Tobiah are in difficult situations and we keep seeing that no matter how much you may desire something when you have people or a kingdom counting on you its never that easy.

Meadows drove in deeper with the characters themselves.  We got to really get into Wil's mind and also see much more of some of the others both those we enjoy and those we wouldn’t mind the wraith swallowing up.  No one was one sided and dull but multi-faceted.  Wil in particular really grows to understand herself but also her powers more while struggling with something everyone can understand, insecurities.  While she has her magic sure I love she never uses it as a crutch but rather her strength and skills she has built over the years is her strong base.

The fact that there are multiple "villains" in the story both real people and the wraith but also the evil inside ourselves.  I loved the complexity of this.  While it did have a few moments here and there where it seemed a bit slower pace than I would like I was so invested in the story and unraveling it all that I didn't mind.  Still there was a level of seriousness throughout and it is very clear there are consequences to this war and people you love may not make it out alive.  Knowing that no one is safe and trying to figure out constantly a way to possibly resolve this into a happy ending for everyone in my head was intense.

Overall as a duology I highly recommend it.  It had all the great elements from complex characters, heartbreak, developed world and story line, and an end that is satisfying.  Sure it may break your heart a million times over but you still love it.  Meadows did a fantastic job of hitting just the right notes of hope and despair throughout.  She also ended things in a way that cleared everything up and didn't leave you with tons of unanswered questions.  I loved it.