Hello happy readers!  So as I mentioned last week in my challenge wrap-up post I explained why I’ve been so MIA as of late.  Also the better news that everything seems to be calming back down I also am fighting off the last of a sinus infection so cheers but I’m getting back into the swing of things and back to blogging as usual!  Also I’m so in love with my house!  I will share photos of the library once I get it finished or at least set up as I want it for now.  Today I want to share my thoughts on Vincent, Survivor (Vincent Series #1) by O.L Eggert, which is the first book in a new series and a debut author for the author.  I was contacted about this book by the author and was happy to received an ebook copy and provide an honest review.  So here goes. 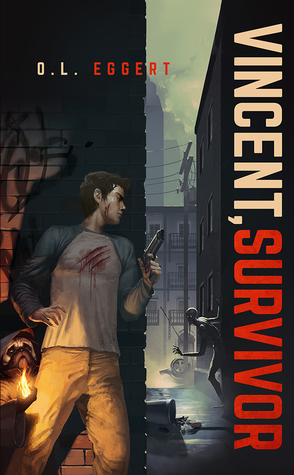 Vincent, Survivor is a bit different than some of the typical YA I've been reading as of late and if I'm honest part of what drew me to it.  It's real and gritty.  It's the end of the world and there is lots of swearing and some bad decisions.  Vincent is a regular guy working in a gang infested home of Oakwood where he always figured he'd end up dying be it from gangs or his vices of smoking and booze.  Never did he think creatures from another world like minotaur's or ghouls and the like would make the list.  Still as the world goes to hell and back as a mysterious figure opens a portal to another world Vincent must face more than he ever expected.  Vincent is a survivor and he will do whatever he has to in order to make it.

The circumstances Vincent and those he is with are faced with and the decisions that have to be made seem like real conversations I'd have.  Saving people and playing hero is well and good but so is not risking your life for strangers on a whim but being practical.  When everything you know about life goes out the window and you're forced to create a new resting point for "normal" you learn things about yourself and what one can learn to adapt to.  That's what kept me in the story as much as the supernatural elements wondering what could be happening next.  The idea that it was about a normal person, not some chosen one or someone destined to be a hero just a normal guy.  As strange as it sounds it seemed normal in his voice.

The story moved along quickly making a fast read.  The only down side to that for me were a few instanced of injury that were very serious but then later at an unspecified amount of time later it wasn't as big of an issue.  This didn't deflect my enjoyment at all I still very much enjoyed the read but just in a few moments did get pulled out of it long enough to check and see if I had missed something.

So Vincent is real.  Some of our other characters had their own great aspects.  I adored Flea.  He was so fun to read about all of his scenes he stole them.  His personality was so strong but then when you have the mental image as well it just took the show.  Grandma was a hoot.  I mean she's not like my grandmas that's for sure but I have known some people in my life that I feel could be her and some parts to aspire to be.  Elise, like Vincent for me, was real in that she really struggled with the whole right and wrong morality of the new world understanding the logistics that the world has changed into a darker version of itself and really accepting it.

Because let's face it there is some seriously dark stuff happening.  Not only from the creatures that have taken over which seem bad enough but then factoring the rest of the human population and if they are a good hearted band of survivors like yourself or a demented band of psychos.  Again the idea that the story pulls in both aspects of the supernatural threat but doesn't ignore that another world might not be the only threats.  Still as dark as the book seems in parts there is still that hope.  You have to have something to keep pushing you to survive the world after all.

Overall I enjoyed the book and I'm happy to have read it and look forward to following into the next book as it wrapped up some aspects but still have a lot of ground to cover and questions left to answer.  Plus I have some suspicions about a few things and I'm curious to see if I'm right or way off base.  Vincent, Survivor was a book that did manage to surprise me at times that is for sure.  I saw a few larger things coming but was kept on guard most of the time which is always fun.