A Song of Summer Lost (The Magh Meall Chronicles #1)

Hello happy readers.  Okay so first things first I am sorry for the lack of posting as of late.  As mentioned previously my bestie was in the hospital for a bit and then when she got out I spent my days off with her rather than reading or typing things on here which combined with my newest Netflix binge, trip, and sinus ick I got be well behind on things and scatter brained.  That said I am working on trying to catch back up and get back on track.  Now on a happier note I was thrilled to finally sit down and get to pick back up A Song of Summer Lost (The Magh Meall Chronicles #1) by Sarah Negovetich.  Now if you remember I reviewed her other Acceptance series:  Right of Rejection, Right of Revelation, and Right of Redemption, and I got to interview her on that series here, so when I found she was starting another series I had to jump on board and was lucky enough to snag an early copy even if I didn’t get to finish it until after it arrived out. 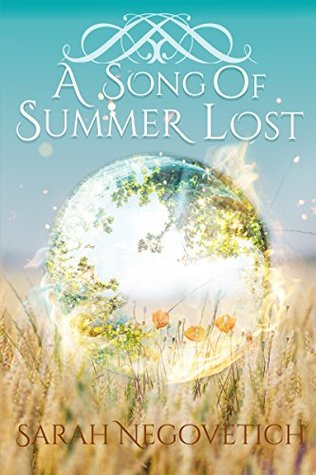 Caolainn, the soon to be crowned princess of the Summer Court of Magh Meall, wanted was to be a princess.  She wanted to play her music not run a realm.  Knowing she can’t avoid her fate forever Caolainn begs her father to make her the temporary emissary to the human realm until her birthday when she is to be crowned and take on the responsibilities of the court.  A temporary freedom.  She is granted this request but soon she realizes there are sacrifices to be made no matter what world you live in.  Caolainn has many tough decisions to make for her people and her heart.

So there are many things happening in this story as we travel into the world of Magh Meall.  There is power, some more powerful than others, and a simple way of life protected from the human realm.  Still it is important to keep appraised of what happens there though most hate to be parted from the beauty of their world but Caolainn is all for it if it means a bit of freedom before her sentence.  I instantly liked Caolainn and her distaste for her future.  She has been held tight for so long it is hard to look forward to a future you get no say in, but at least she has her music.  She fully commits to the music and the pure love of it and it shows each time she is faced with music how deep her love goes and while I am not at all musically inclined, sadly, each time she played/talked about it I wanted to learn.  To feel that same feeling.

Aside from out MC we also have a very collective bunch.  Siobhan, the mother figure who has cared for her all her life and her only real friend in Magh Meall, who helps her keep her sanity when Ardan, her future advisor, drives her crazy, and her future husband the youngest Prince of the Winter Court, Mathol.  These we get to see in the beginning in the natural world they know but as we move into the human world Siobhan and Ardan tag along, like it or not, and we get to see them interact with others: Kit, May, and David to name a few.  As Caolainn has to attend school in the human world while there she gets to attend a music school which is pretty much cloud nine for her.  I enjoyed watching her try to adapt to the different world, despite studying it can be a HUGE culture shock to anyone, let alone someone who is normally all to herself.  Friends and interactions with people her own age (whom she doesn’t want to punch constantly) were a real treat and fun to experience with her.

The story focuses on Caolainn and her journey and the sacrifices she is willing to make.  I enjoyed the character driven aspect and as we got to know bits more of the darkness and evil in the world.  And how music was a such a focus in the story, a character in its own right.  We aren't just told of the love of music but we see it, even someone as musically inept as myself could feel it while reading and that is always impressive!  There is so much being built in this book I am excited to see where the story will go from here.  Some things occur in this one that I didn't expect for sure and now that they have I am thinking of all the things it could mean.  I am curious to see the future interactions between the courts as well as the Magh Meall and the human realm.  There is lots more to be told for sure and I can't say more without giving away some serious bits so I will have to leave it there.