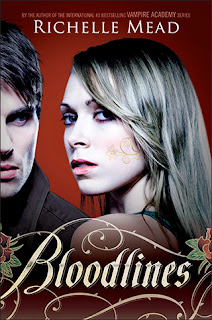 I finished this book last night, early this morning but I stayed awake only long enough to finish.  I really loved this book, it goes along with The Vampire Academy series by Richelle Mead.  I’ll be the first to admit when the Vampire Academy series ended I was so sad I wanted more of all the characters so when I heard there was a book that was in the same universe I had to check it out.
Bloodlines is based just after the other books end so I highly recommend you read those first or it shall spoil them for you and you might not grasp the depth of some of the relationships that are discussed.  By this I mean back story with some of the characters, why they feel the way they do.  Sure you could read it alone and understand things but I don’t suggest it.
Basically the story is from Alchemist Sydney’s point of view.  Readers met Sydney in the last few books of the original series but it’s never clear what happens after to her after that story ends.  Now we find out.  This also continues with the overall story that was created but expanding on more and different characters.  This new spin-off series will focus on Sydney, Jill, Adrian, and Eddie and others.  I have to say I’m super stoked about Adrian being in it because I liked him, he had tons of flaws but he still had these moments where you can’t help but love him.  In the previous books he was in love with a girl who was already so deeply and completely in love with someone else she thought she’d lost forever when they got together he didn’t really stand a chance at having her full heart or keeping her when things turned around.  As happy as I was with how the triangle ended up (Adrian is great but I heart my Dimitri) I was still sad for him.
So we have Jill going into a type of witness protection for vampires.  Trying to hide from her own kind who are trying to kill her.  Eddie is her Guardian and the Alchemists are trying to help with everything for the sake of keeping balance in the world which is their job.  Sydney is in trouble from her actions in the other series but gets sent on this assignment and finds herself in a bit of a mess.  Not only does she have to live with a vampire which she is raised to believe is horrible monsters but she has to work on being socially inept at school, a senior alchemist in charge trying to get rid of her, and a mysterious tattoo ring in school.  Lots going on that’s for sure.
What I like most about Sydney is her struggle.  All her life she’s been raised to believe that the Mori (full alive vampire), Dhampir (guardians of Mori and half vampire), and Strigoi (undead vampire/evil), are all horrible abominations.  That however conflicts with everything she has seen when helping in the original series, she sees they can be normal people if you don’t think about the other part (well not the Strigoi).  So she struggles with her beliefs, she believes in what she does but not in everything, the way you have to give yourself up no more choice in your own life and you can’t have an opinion.  Rules and procedure.  That is life.
We also get to see more flushed out sides to Jill.  She wasn’t really developed too much in the original series, a major part of the story rested on her but as a character we didn’t get to know her.  In this we do.  Also as I previously mentioned more Adrian, yeah.  He struggles daily with things and as a Spirit user (all the Mori have a special ability with magic, one of the 5 elements, Spirit being only recently discovered again), and Spirit dose take a toll.
I enjoyed this book so much and I highly recommend the whole series.  I can’t wait for June when book 2 comes out.  Even thought The Vampire Academy ended I am excited to be able to continue the story and get glimpses of one of my favorite couples here and there while enjoying everything this new spin-off series has to offer.  Some romance of it’s own is blooming I dare say.
***** 5 Stars
Posted by Eve at 5:03 PM