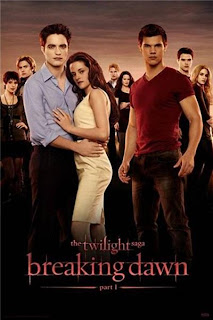 Okay so I meant to get this in sooner but sigh I passed out last night way earlier after spending the day with family.  But here is my much anticipated review for Breaking Dawn Pt 1.
Now I have to give a shot out to all of my amazing friends and fellow Twi-hards who sat outside the theatre before hand and had our own little party.  Lots of games and trivia, which I must say I rocked at.  So the movie started with an invitation to their wedding.  I loved the movie.  As with the others I still love the book more but that aside it was a beautifully done movie.  It captured all the beauty and intensity of the books.
The wedding was beautiful.  I mean beyond beautiful I don’t have any desire to get married or anything but if I ever did that wedding was it.  The honeymoon, Isle Esme was gorgeous.  I want to vacation there.  That I felt stuck pretty good to the book, how nervous Bella was about it but also excited.  Her ‘human minute’ which I have to say made me giggle since I have been slightly disappointed that they haven’t made mention of her human moments before now.  The water, the dreams/nightmares were vivid and clear.
So from the previews you know she ends up pregnant that isn’t really a spoiler unless you live under a rock.  So yeah that is unexpected and no one thinks it can happen because well…let’s face vamps don’t sleep with humans.  They did cut down the droopy brooding after the first time some which I liked, not focusing on it so much just getting to the point and moving on.  The pregnancy takes its toll on Bella and everyone physically and emotionally and I think they portrayed it very well.
Now I admit there was a bit of cheesiness with one part with the wolf pack.  They are all in their wolf forms and they are arguing so its mostly voiceovers as they talk telepathically.  I know they had to do it that way, they had to be in wolf form for it to really make an impact and they did their best.  Speaking of wolves, I’m so happy we get to delve into Leah and why she is…bitchy.  The scenes from all the movies flashing through Jacob’s mind as he runs through the woods, everything was stunning.
Now as for where part 1 ends I will brag that I had it pegged.  Me and my friend talked about it before the movie and towards the end I told her where I thought it would end and sure enough I was so right.  Also for everyone who hasn’t seen it yet wait after the credits there is a scene with the Volturi.  Overall I shall give this movie the full 5 Diamonds (fitting I think).  It’s PG-13 but nothing major they don’t show too much clearly.  There are a few lines in the book I was sad I didn’t see in the movie but as a movie itself it was very good and I can’t wait to see it again.  The biggest downside is that I have to wait until Nov 16, 2012 to see part 2.
I hope you have enjoyed this review and that you enjoy the movie.  Oh and side note I just recently read a review a guy wrote about the movie.  There is no pedophilia going on, imprinting is described in book and movie 2, New Moon, as a connection.  It’s also described again in this movie, a connection, a friend, protector, whatever the person needs it doesn’t have to be romantic.  Had to clear that up after reading that in a review.  Okay that’s it.  Please comment.
Posted by Eve at 4:32 PM