This will be a quick little review of these movies all of which I got on Black Friday.  Just thought I bared a review even though they have been out for a while…oh well this is my blog and I’ll review what I want J 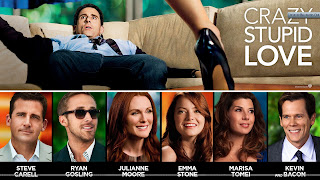 So first we have Crazy Stupid Love.  I wanted to see this movie in theatres so badly but sadly the timing would never line up with the movie marathon days or I just couldn’t get someone to go with me and let’s face it movies seem more fun with shared with someone else.  So I watched it on DVD the other night finally and thought it was ubber cute.
Steve Carell is funny, I never watched the office and some of his movies for me are hit or miss but this was a hit.  Ryan Gosling who might I say is sexy also plays his role of womanizer/teacher well.  You believe everything he says and half the time you’re laughing your behind off.  The rest of the cast Julianne Moore, Emma Stone, Marisa Tomei, and Kevin Bacon were great.  Basically it’s a story of love and how it can be crazy and stupid as the title might suggest.  Marriage, adultery, bar hopping/one night stands, young love, crushing on an older man, safe choices and going for it.  It was a really cute movie that had moments of sadness and awe mixed in with pure unfiltered laughter.  I recommend it.  4 Stars 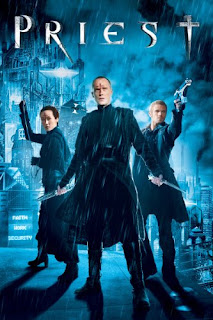 Now let’s talk about Priest.  I watched this movie originally in theatres.  I enjoyed it.  It’s not the type of movie for everyone but what can I say I’m open minded.  As mentioned I bought this the other day on sale and re-watched it last night.  It’s a dark and different take on vampires and even though I’m a total romantic and Twi-hard I still like the dark evil vampires.
This has Paul Bettany, Maggie Q, Cam Gigandet, and Karl Urban among others.  It’s a different world ravaged by vampires and the only thing that helped keep people safe were Priests.  They were found by the church, faster, stronger than normal people who could take on the murderous vampires.  After the vampire menace was eradicated the church who controls everything stripped them of their title and duty.  The people live under the church, the only ones who can keep them safe in the walls.  Basically Bettany’s  character’s niece is taken by a group of vampires and he asks permission from the church to go find her.  They decline he goes rogue.  Simple enough but you have this threat that isn’t supposed to be a threat coming back the church denying it, and a priest trying to save his family.
I liked the movie.  Sure there are some continuity problems and some of it, okay most of it is totally outlandish and unbelievable but come on people it’s a post-apocalyptic sci-fi thriller with vampires.  Just sit back and enjoy.  If you life sci-fi and action then you’ll enjoy this.  Don’t take it too seriously, it’s fun…in a dark way.  I give it 4 stars. 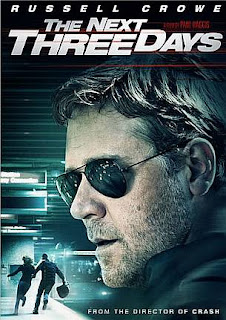 Last but not least we have The Next Three Days featuring Russell Crowe and Elizabeth Banks.  This movie is a crime drama thriller.  Basically Lara (Banks) is put in jail after being convicted of killing her boss.  It’s been 3 years and things are looking bad, no upside.  Husband and father to their 6 year old John (Crowe) immerses himself in planning her escape.  The movie was pretty good, you follow the trials and errors and how a school teacher plans a prison break and deals with the stress of everything.  I had to laugh at parts, you really can find anything online as John learns lol.  Also there is a guest appearance by Liam Neeson who I adore.  Overall the movie was pretty good and I was entertained.  I give it 3.5 stars.
That’s all the movie reviews until next time.  Let me know what you think about these in the comments.
Posted by Eve at 10:39 AM