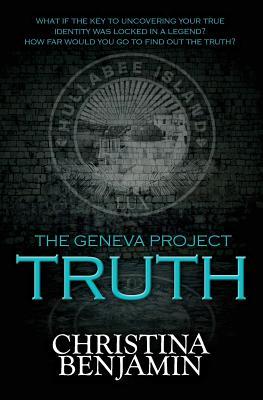 Welcome back to Wednesday fun!  Review time.  Today I’m going to discuss a book I got while at UtopYA back in June.  I’m starting to catch up with some of the amply amount of books I came away with.  Seriously, more than a carryon suitcase can hold.  That and a huge tote bag full and some.  Yep lots of books!  Plus even more I got on my kindle while there or added to my wish list.  Anywho I’m starting to get into them and add them into my current TBR lists.  Today that book is The Geneva Project: Truth by Christina Benjamin, the first book in The Geneva Project series.

Briefly Truth centers on an island that was devastated by the flood several years ago that left many orphans.  The orphans are trapped at the center and put to work scouring the islands flood zones recovering precious stones and things of value for the wealthy citizens of the still prosperous city Lux.  Orphans have no individual names only numbers affixed to John or Jane.  Truth focuses on Jane 65, she is different, the youngest orphan in the center found as only a baby. Her life is rather dull until one day she meets a John from the older year.  He handles himself differently and…he knows his name.  This sets her down a road that spirals her dull life into something completely different as she searches for answers to who she is, the legends of the island, and the magic within some of the orphans.  However, on this quest to self-discovery 65 and her new friends must navigate the new information and who to trust while keeping it a secret from the evil head mistress of the orphanage. 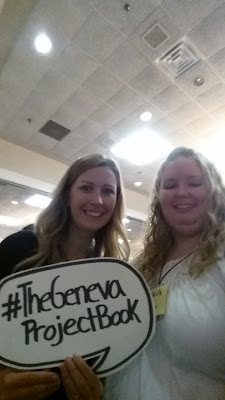 I was intrigued by this book from the start.  I looked up some of the authors for UtopYA beforehand hoping to get an idea of some of the books and to do some pre-orders to keep my budget in check.  Without a budget you could get in serious trouble at a book event.  Truth and the sequel Secrets were on my pre-order list.  The covers called to me, simple and mysterious, and the description or blurb I read for them made me want to know more.  When I went to pick up my books Christina had them all put together in a nifty bag and everything all ready to go including items for photo ops!  We took pictures and discussed her books for a nice little bit and it only made me want to read it more.  If you ever have the chance to hear an author gush about their books I highly suggest it.  Her enthusiasm and friendliness were contagious especially to someone like myself who was still feeling a bit shy at the beginning.

This book did not disappoint me.  The world building was done in a way that you don’t really notice it.  The world just comes to life around the characters.  You get to know the world along with Jane 65, ‘Tippy’, and the story unfolds.  The island seems massive with the glamourous city of Lux, the orphanage, the flood work zones, and the vast forest that scares people away, and who knows what else could be on the island we haven’t yet discovered.  Still it had the overall feel of an island like you see on movies or if you luck on vacation.  Also placing the story on an island lends to the seclusion of it all.  Isolated and no real ability to ‘run’ if one wanted as there is a limit to how far you can go.

Everyone has numbers and not names.  That is a hard idea.  To be regulated as a number, not good enough for a name.  This book handled the idea of self-identity very well.  Some remember their names but you are unable to use it in public, others knowing is a luxury, a privilege almost.  Then you have 65 who is unable to remember anything being as she was too young to have any memories.  She has no idea who she was, she only has a number and no name to hold onto.  She gets a nick name, Tippy, which I find myself always wanting to use instead of something as impersonal as a number.   It’s easy to follow Tippy and root for her.  She is easily likeable.  She is a year younger than the rest she is housed with but always fits to be just as fast and smart as them.  Even more so as the powers come into play.

Speaking of powers.  I liked that how different they were and how they came about.  Taking time to learn to use them and improve upon them.  There were so many different ones happening but I think one of my favorites was hearing and talking to the animals.  It was only touched upon but that just struck a cord with me.

While the powers of some of the characters are pretty spectacular and fit quite nicely with each of them I would love them without them as well.  Which means they are done well.  First I must say this.  I heart Niv!  I gushed over Niv.  Aside from Niv we have Nova, the boy who started it all but telling Tippy he knew his name.  He is friendly and sweet from the start, a year older but always treating Tippy the same as everyone else.  Tippy's best and only friend in the beginning is Remi.  They are the quite duo.  They both kind of keep to themselves and only talk to one another not having lots of friends.  Peas in a pod.  I have some theories about him and his character arc to come.  Then we have two who seem like opposites but are like family, Journey and Sparrow.  Even mean girl Jemma has some depth to her you want to learn more about.

I think the story was well paced and kept you wondering what is happening next.  You wanted to go on the journey and find the truth with the gang.  It went by quickly and I didn't want to put it down.  Everything flowed neatly into the next.  My only problem, and I am leery of even calling it that, was that I had with the age of the characters.  They are only thirteen, making Tippy twelve.  It just seemed a bit young for some things.  Maybe I'm dating myself but that may just be that when I was twelve boys were still kind of icky haha and I don't think my thoughts were that deep.  At least not on a regular basis.  I know things have changed in the recent years but mentally I kept aging the kids a few years.  It didn’t hinder my enjoyment at all, like I said my mind just mentally aged them almost without me noticing.  It wasn’t until the age is stated again that I’d pause for a moment like I just realized that. 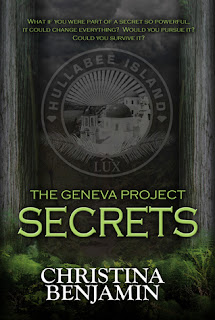 I'm going to be starting the sequel tomorrow, or today depending on what time I wake up, and I look forward to continuing the series and finding out what secrets are waiting to be uncovered.  I look forward to sharing thoughts on it soon.  Also as an added bonus the third book in the series, Lies is set to come out on September 1st!  Which means a super short wait which is always a plus.  Share with me below your thoughts and feels on the book.  If you could have any of their powers which would you choose?  Or pick your own.  Comments fill my heart  with happiness J  Until next time.
Posted by Eve at 2:00 PM