Hi there!  So I admit I probably won't get much done, after this I have a few things to take care of then I am spending the weekend celebrating my birthday!  Well mine and my two friends little one's first birthday, but they're cute so I'll share!  But before I disappear into that I wanted to continue my thoughts on the beautiful Throne of Glass series by Sarah J Maas continuing on with Crown of Midnight.  My Throne of Glass review can be found here.

Crown of Midnight picks up where we left off so I there will be some spoilers if you haven't finished book one yet.  Sorry but catch up and come back!

That being said we have Celaena won the brutal contest and is now the kings Champion, more like his personal assassin.  She isn't the perfect loyal assassin she should be, but she must hide her actions to keep her life because the king is downright evil.  Keepings things balanced gets harder as she finds allies.  There are still mysteries buried deep in the castle and no one is immune from suffering.  Everyone is questioning her intentions, Crown Prince and ex something Dorian, Captain of the Guard Chaol, even her friend Nehemia the foreign princess.  Secrets lead to tragedy and Celaena's world comes apart.  She is forced to make a decision of her loyalties and who she is fighting for.  Her decision could change everything.

It's pretty insane.  There is lots of political intrigue.  I really liked how double agent it felt all the secrets meetings and hidden agendas.  It was all so mysterious.  Everyone is fighting for power, to overthrow the evil king and trying to figure out the mysterious Wyndmarks. That alone would have filled the story but Maas is able to add in the perfect amounts of action as well to always remind up Celaena is a bad ass assassin who will take on as many as it takes.  When she loves she is in 100% and if you mess with her, her dark side is vengeful and swift.

I really enjoyed the story.  Now in the last review I mentioned I was on the fence for her relationship status.  She and Dorian had a small thing but all the while I felt that Chaol seemed like he might be better for her.  Then in Crown of Midnight I just totally fell in love with Chaol and I am on Team Chaol for sure.  Everything was just spot on.  They shared so much one another.  They could be together and be themselves, she still held some secrets but she opened up so much with him.  He understands her need to battle and can see the balance of well groomed diva to full on warrior, she is a balance.  I love what he is able to bring out in her.  He pushes her physically in training keeping her on her toes but he is also able to see what she is and what it has done to her.  I liked seeing more to both of them.

Now as I never disliked Dorian I hated that he was hurt but it.  He was jealous.  I got that.  I understood but he was able to be friends with her still.  We also got to see him come into his own secrets and Celaena protected them.  They make good friends.  I could see them as a couple maybe, it wouldn't be horrible, but the issue is I love her with Chaol.  Plus Dorian and Chaol are best buddies and this puts a strain on their relationship for sure but I'm confident they will work through it.  True friends are like that.  Even Nehemia and Celaena.  They argue about most things but when they talk, it is something that Celaena needed.  I think she is still coming back to herself after her ordeal in the mines and having a girlfriend to talk about crushes with was just, the scenes were so well worked into the storyline that they played from one to the next seamlessly.

The mix of her missions to kill but all the while trying to save her soul.  I love the inner battle she faces each time.  She risks so much each time.  It broke my heart over and over again.  I had to stop reading for bits of time because I was so emotionally invested and Sarah J. Maas just ripped my heart out over and over.  I needed more but I was scared I couldn’t stand it.  Truth.  I was concerned for my characters lives every step through the length of this book.  I was worried something would happen to them at every turn.  No one was safe.  Emotional pull for the story.  I was connected.

Okay without any spoilers, there is an 'event' that just turns the tables on everything.  This even hit me in the feels.  I balled my eyes out, not just for it but for the repercussions, the aftershocks.  Still nothing that happens changes my mind one bit.  I'm still solid in my team.  Then the end.  Such feels there.  Now we know one secret though I think everyone already knew, and has known since it was first mentioned in book one.  Still the confirmation is just…like a bomb. 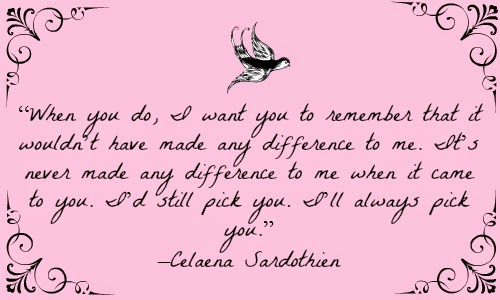 Anywho that is all for this discussion.  I LOVED this story and I will have my Heir of Fire review coming up as well as we get closer to Queen of Shadows review time.  I have to finish and process all the thoughts and feels.  Share with me below your thoughts.  I'm dying to know what team everyone is on.  I know everyone seems to be rooting against me.  Share love and leave me a comment.  Until next time.
Posted by Eve at 2:57 AM