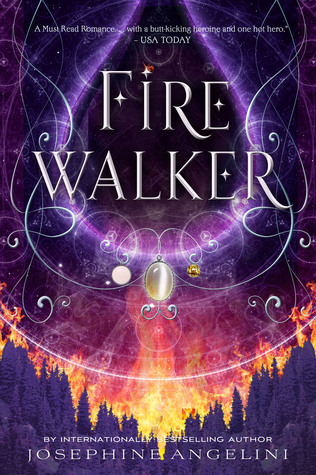 Hello readers!  I hope you had a great weekend.  I completed my first rosette cake, a smash cake for one of the two 1st birthday parties I went to on Saturday, my birthday, so it was full of sweets and birthday cheer!  I think the cake turned out very good!  I'll post pictures below.  What I really wanted to discuss today is a newer release, Firewalker by Josephine Angelini.  This is the sequel to Trial by Fire which I reviewed here.  I was beyond excited to get this book as I had been waiting a long time for it.  This being a sequel there will be some spoilers for the first book as this picks up at the exact moment Trial by Fire left us hanging.

That's the tagline.  Lily is back in her own world, and she's ready to start a new life with Rowan by her side.  After healing from her near death Pyre incident. She now must hide her magic for obvious reasons.  Still things seem much easier than the near constant threat of death she faced in the other Salem with the monstrous Woven and her evil other self.  Still other her, Lillian, the ruthless ruler of the other word is not willing to let her and Rowan go.  She decides if she can't reason her into coming home she will force her hand in any way necessary.

Firewalker was my other must have release of September 1st and I got right to it.  First I have to mention the cover change.  Now I loved the original cover for book one but the new ones are even prettier.  It's even pretty naked.  Now I'm not a huge fan of my covers not matching but still it's pretty.  Also there is a novella between the two books, it's not necessary it's just from Rowan's perspective as he finds Lily and believes she is Lillian and how he comes to realize that isn't the case.  As I mentioned Trial by Fire may have left us with a cliff hanger, Lily and Rowan about to jump worlds after he said he was sticking with her always.  Super sweet.  Well they jumped.  Downside is that Lily is in seriously bad shape after staying on pyre so long for her first time first fueling her army and then for the world jump.  She needs her mechanics attention.  Turns out coming home also has some troubles besides healing up.  Apparently when you go missing for weeks on end the authorities get involved. 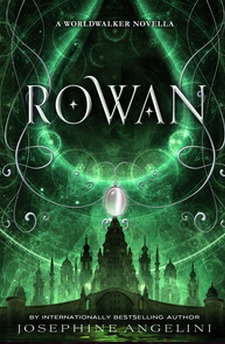 Rowan is put into a work he is completely unfamiliar with and tasked with saving his witch with the help of her mother who's head isn't always in this world and her sister in this world, a nurse, who isn't sure what she believes. Tristan of her world is there as well, he has been worried for her since she disappeared.  Her Tristan is like Rowans best friend, he has the power to be a strong mechanic inside of him but in a world without magic he was never awoken but with a witch in this world, and a powerful one, there will be those now drawn to her power if not knowingly.

Lily quickly makes a new group of friends and at Rowans insistence her own coven.  There is a lot going on and we see it from different perspectives which was interesting.  There were also lots of flashbacks/memories that Lillian shared with Lily trying to make her see her side of things and convince her to return.  I liked seeing the reversal of roles, Rowan in an unfamiliar setting.  People questioning him.  Though it was like a walk in the park learning to navigate the new world with the internet and such vs constantly being on the move and attacked from all different sides from the cities and the Woven.

That's all I can really say without giving any spoilers.  Now I want to talk about the characters some more but I have some serious things to say and some will be spoilers.  You've been warned so read on at your own discretion.

Lily.  She has grown so much since the first book.  She has come into her power and while it does call to her she is able to resist it and is scared of the feelings it gives her, making her want to lose control.  I agree with Rowan here, her being careful and fearful of losing control makes me think she will never be like Lillian in the sense that she respects the power she was given more.  Still seeing her in her own world, where she left broken hearted and weak and coming back strong in many ways and with the love of her life there with her was great.  She had a huge crush on Tristan and had thought something was finally happening between them when she caught him with another girl and then proceeded to have an episode and went straight to another world.  Seeing her face him again, I was proud of the way she handled herself.  Even as things turned bad and she could have easily sought out solace in him, in that way, she didn't and I really liked that.

On the flip side, her other world self Lillian changed some too.  Not so much the character changed but our understanding of her changed.  She has always said she has a reason for the evil she has done and she will be the villain to let him stay the hero, that she really loved Rowan and that what she did to him was out of love.  I always thought she had knocked her head or got a bit to high on witch magic with that line of thought.  Every good villain always thinks they are doing what is best.  Still seeing her memories and how her good intentions were turned against her and would create something none of her world would survive I understood.  I still don't agree with her methods and don't think I could ever forgive her some acts, but I understand what was driving her.  That was a unique perspective to have.  Understanding of the villain of the story.

Then we have Rowan.  I was cold to him at the start of the first book because he was kind of an ass.  As the story wore on I understood him and his reasoning and conflict but grew to love him.  I was just so happy for him and Lily.  Still I knew something was off from the start.  Knowing everything he had been through I even suspected things.  Still these two suffer from a huge obstacle.  Lies and half-truths.  I think so much of this could have been cleared up with honesty, it would have sucked and it would have hurt but I think it would have been understood and then everyone would have been on the same page.  I also think if Lillian had just been honest she could have saved so much trouble.  While I understand the desire to protect the one you love from that information, I think in the end it would have been easier for him to take. I thought Rowan was a strong character and I think both Lillian and Lily sold him short on what he could handle.  Lily in particular who is always upset about him trying to decide what she can and cannot handle. Though my views on Rowan change by books end.

The journey of this book, trying to understand the past and find a solution for the future of this world is epic.  Facing the different woven, trying to understand them and feeling their may me more to them.  Firewalker let me more heartbroken and in a state of emotional duress than the first book and all I want is to know what happens next and hope that some things can be fixed, though I'm not sure they have not passed the point of no return.
*****Spoilers***** Really need to discuss so only read this next paragraph if you've finished Firewalker***** 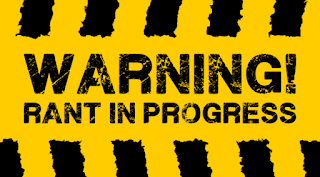 I went from loving Rowan to having an issue with him and not liking him one bit.  First he is going to leave her, which is a dick move by the way after you swore your place is by her side and you came with her to begin with.  I understood his need to go back but to wish to be apart and keeping it from her was not cool.  Also he's all about wanting to know everything and not be pushed out but he does a lot of secret keeping and pushing her out of things which makes him a hypocrite and I'm never fond of those.  Then back in the other world together all happy and even finally have their alone uninterrupted sexy fun times and it all seems good, minus her small secret but that seems simple now.  Nope then he does the unforgivable.  He sides against her.  He does it by taking her willstones.  That's it for me for him.  I don't care his reasoning behind it and I don’t know if anything could ever make up for it to redeem his character to me.  He made her show him what those creeps did to her and her willstones when they tortured her.  He knew what they did and he vowed to never let that happen to her again.  Then he DID that very thing to her himself.  What they did to her in that place was evil and unforgivable but I feel what he did, knowing that and what it did to her, makes him a bigger monster.  He was too chicken to do that to the evil Lillian whom did horrible things but he was able to do it to the sweet Lily who just wanted to make things better and only wanted to help people, who always tried to respect the power she had been given.  The one whom he said he had always loved, she's the one he was able to torture like that.  I'm curious how he plays into the next book but honestly I'd be okay if he was brutally murdered at this point.

*****Spoiler rant over*****
That's all I have to share about Firewalker.  I did enjoy the book, though it left me an emotional wreck and in desperate need of the next book.  I highly recommend this series to anyone who enjoys fantasy, magic, witches, parallel universes, rebellions, constantly evolving characters and all that good stuff.  Just be prepared to be in shock and awe.  Tell me what you think in the comments below.  Have you read Firewalker yet?  Tell me what you think about my rant, though please state spoiler in the comment to be safe.  I'm dying to discuss this book with someone!  Until next time.
Posted by Eve at 12:42 PM